Pittsburgh Having A Big Technology Boom 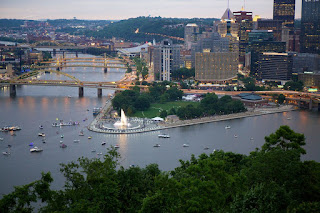 At a conference in Pittsburgh last month showcasing new technology companies, Mayor Bill Peduto cautioned the city to avoid the “precarious position” of Silicon Valley, where an explosion of tech wealth has left many people behind.

Benefits of the tech boom have been limited. Around Allegheny County, where steel and natural gas industries still provide an important, albeit declining, number of jobs, about 12 percent of the population still lives in poverty.

Pittsburgh’s angst comes as new tech replaces old industry, offering the biggest economic opportunity since the first steel mills opened at the end of the 19th century, but with no assurances of who will benefit.

Much of the new activity springs directly from the artificial intelligence and machine learning technologies pioneered at Carnegie Mellon University and the University of Pittsburgh, premiere academic institutions that have helped anchor the city through its industrial decline.
Posted by DJ Sippitakeover at 4:06 AM