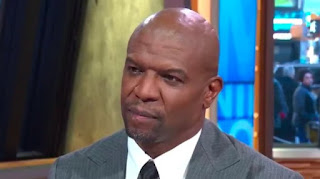 Terry Crews finds himself in a new legal battle after a former friend sues him over unpaid wages for his work managing Crews' social media accounts. Darwin Hall is claiming that he is owed $1 million for his work and is also claiming that Crews defamed him in a series of tweets this past winter.

Hall said he agreed to work with Crews dating back to 1999 to help promote his career which morphed into Hall operating Crews' social media accounts and personal website. Hall said he's only been paid $28,479.06 and says that most of that money was reimbursements. Hall claims he's still owed for 6,000 hours of work at a rate of $55/hr.

Although Crews didn't mention Hall by name in his tweets back in December, he called the man a "mirroring sociopath" and “One who pretends to like things you like in order to manipulate and control."

Posted by DJ Sippitakeover at 9:59 AM