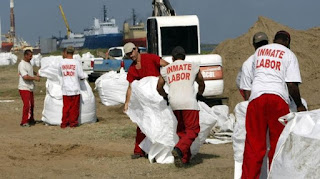 On September 9, 1971, nearly half of the 2,200 prisoners in New York's Attica Correctional Facility staged a revolt to demand better living conditions. Exactly 45 years to the date, inmates from 40 prisons across 24 states, were unified in taking a stand of their own, which is comprised of many of the principles the prisoner's of Attica '71 stood for. Organizers who dubbed the event a call to end "modern-day slavery," are hoping that the strike their action boils down to, will speak loudly enough to force a change of living conditions, forced labor, and some fundamental pillars of the criminal justice system which they say sustains the oppression of the prison population.

Back in May, an Alabama prison strike followed one that took place in Texas the month prior, thus, the act is not necessarily anything new per-se. But it is one of the first times in modern history that inmates across state borders have attempted to coordinate a nationwide demonstration. Plans for the national protest were born out of The Free Alabama Movement, whose members began circulating fliers inviting prisoners to come up with demands they would recommend for improving conditions.

Some of the typical jobs inmates hold include landscaping, kitchen work, and general cleaning. While wages in some prisons very from state to state, inmates in federal penitentiaries earn between 12 and 40 cents an hour. In Texas, Arkansas, and Georgia, prisoners do not get compensated at all for their labor. Even more disconcerting to activists is the fact that prisoners really have no choice but to accept the work they are given, or face repercussions. "Typically prisoners are required to work, and if they refuse to work, they can be punished by having their sentences lengthened and being placed in solitary confinement," Wright said Editor of Prison Legal News.

"We're realistic. We know that all our demands aren't going to be given to us," says organizer Phillip Ruiz of the Incarcerated Workers Organizing Committee. "The hope is that some concrete things develop as far as changing the conditions." He hopes the protest will send the message to prison authorities that "You guys aren't going to get away with what you're doing to prisoners anymore."

Posted by Jessithapromoter at 8:41 PM