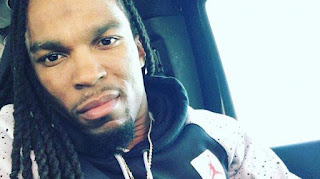 Darren Seals, an activist who gained prominence after protesting in Ferguson, was found shot to death inside of a burning car on Tuesday (September 6) around 1:50am. According to reports, St. Louis police were called to put out a burning car, and after they extinguished it, they found that the 29-year-old activist had been shot. His death is being treated as a homicide.

Seals was outspoken following the death of Mike Brown, who was shot dead by officer Darren Wilson, after he saw the 18-year-old lying dead in the street. Seals was featured speaking about the incidents in features from Al Jazeera and The Washington Post.

Posted by Jessithapromoter at 1:06 AM