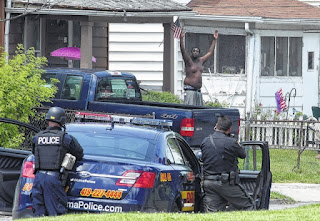 A member of Gansta Marcus rap group The Kings Of The Bean (K.O.B.) gets a 100k bond set. Check out the police report below.

LIMA — A suspected hostage situation came to a peaceful resolution Wednesday afternoon after the Crisis Negotiating Team talked a man out of a home where he had barricaded himself.

Lt. Andy Green of the Lima Police Department said officers were alerted to the situation after a woman flagged an officer down at 11:40 a.m. in the area of the 1000 block of South Union Street. The woman reported she had been held against her will at gunpoint at a home located at 1044 S. Union St. Officers set up a perimeter in the area to investigate the situation further.

The negotiating team was able to make contact with the male subject, who was later identified as Jacquavious Cartwright, 28, of Lima. They eventually persuaded him to surrender peacefully. According to a press release from the LPD, Cartwright entered the home with a gun and acted irrationally. He was upset prior to arriving at the residence and made threats.

Cartwright was found to have active warrants for his arrest, and there were other individuals still inside the house. A woman that was the final occupant besides Cartwright escaped by jumping from a second-story window at the residence, injuring her ankle in the fall.

Cartwright surrendered to officers after about two and a half hours of negotiation and was arrested on the active warrants. Cartwright was taken to the Lima Police Department, where he was also later charged with inducing panic.

Green said Cartwright did not have a gun when he surrendered. Cartwright was not a resident of the home. Officers were still searching the residence, and the investigation is continuing. The Allen County Sheriff’s Office, the Lima Post of the Ohio State Highway Patrol, the Allen County Dog Warden and the Lima Fire Department provided aid at the scene.

Posted by DJ Sippitakeover at 12:15 AM